There are several important anaerobic digestion process parameters, growth kinetics and environmental factors that have to be controlled in order to optimize the process. These parameters along with their optimum ranges, as reported in various literatures are briefly discussed below: 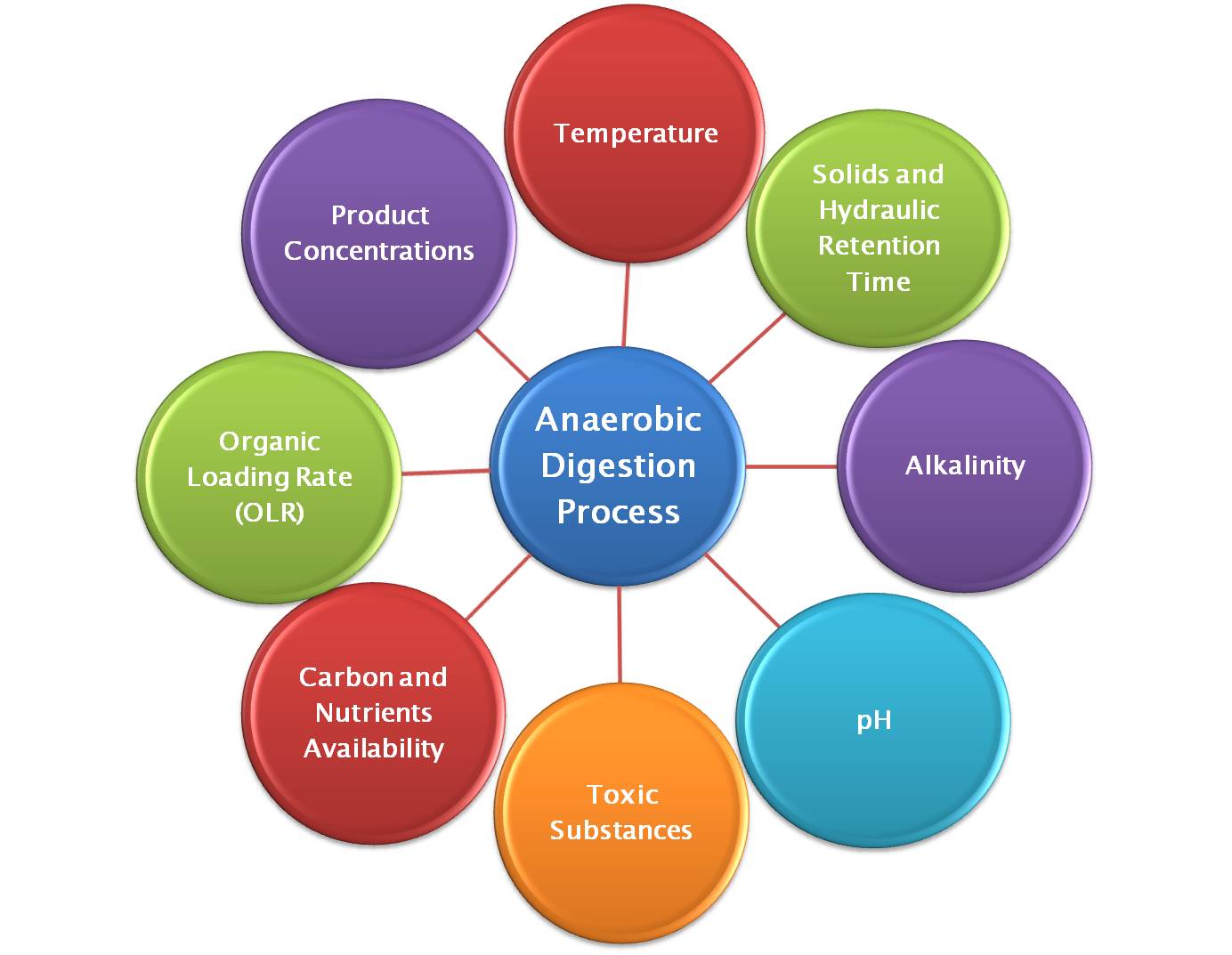 Solids and Hydraulic Retention Times (SRT and HRT) are the average time solids and liquids are held in the digestion process. Anaerobic reactions (hydrolysis, fermentation and methanogenesis) and anaerobic reactor size are directly related to these parameters. Each of the anaerobic digestion reactions requires a minimum SRT to be completed and if the design SRT is less, than that the digestion process will fail (Metcalf and Eddy, 2003). In a completely mixed reactor with no recycle, solids and hydraulic retention times are the same. In practice, for high rate digestion the values of SRT range between 10 to 20 days (Metcalf and Eddy, 2003).

In general, hydroxides and carbonates of calcium, magnesium, sodium, potassium and ammonium produce alkalinity in the wastewater. Alkalinity plays an important role in anaerobic digestion process as it control the pH by buffering the acidity created in the acidogenesis process (Olvera and Lopez, 2012). The alkalinity of the digester in general is proportional to the solids feed concentration of the digester and in a well established digester the total alkalinity ranges between 2000 and 5000 mg/L (Metcalf and Eddy, 2003).

The growth of anaerobic process microorganism significantly depends on the pH value of the system. Most methanogens prefer a narrow pH range and the optimal is reported to be 7 to 8. Acidogens usually have a lower value of optimum pH. The optimum pH interval for mesophilic digestion is between 6.5 and 8 and the process is severely inhibited if the pH value falls out of this range (Seadi et al, 2008).

Some inhibitory substance as explained in ‘Digestion Inhibitors’ documents by The Sustainable Energy Authority of Ireland (SEAI-http://www.seai.ie/) are listed as follows:

Nutrients like carbon, nitrogen, phosphorus and sulphur are very important for the survival and growth of anaerobic digestion process organism. Different micronutrients/microelements (trace elements) like iron, nickel, cobalt, selenium, molybdenum or tungsten are also essential for the anaerobic process microorganisms. Insufficient amount of these nutrients and trace elements can cause inhibition and instability in anaerobic digestion process. The ideal carbon to nitrogen (C: N) ratio for anaerobic digestion ranges from approximately 20:1 to 30:1 (EPA, 2012). The optimal nutrient ratio for the carbon, nitrogen, phosphor, and sulphur (C: N: P: S) is considered to be 600:15:5:1 (Seadi et al, 2008). It is also reported that to maintain optimum methanogenic activity, desirable liquid phase concentration of nitrogen, phosphorus and sulphur should be in the order of 50, 10 and 5 mg/l (Metcalf and Eddy, 2003). In addition, it is suggested that level for iron, cobalt, nickel and zinc should be 0.02, 0.004, 0.003 and 0.02 mg/g acetate produced respectively (Metcalf and Eddy, 2003).

Organic Loading Rate (OLR) is defined as the amount of organic dry matter that can be fed into the digester per unit volume of its capacity per day. It is usually calculated based on the mass of volatile solids added per day per unit volume of digester capacity. Another way of calculating it is, the amount of volatile solids added to the digester each day per mass of volatile solids in the digester; although the first approach is favorable (Metcalf and Eddy, 2003). Loading rate is an important operational factor for digester because if it is too high, valuable methane former can washout from the system. In addition, toxic materials like ammonia can accumulate and upset the process. On the other hand, if the lading rate is too low, it can result in lower organic solids destruction and lower biogas production. Moreover, larger uneconomical digester will require higher heats. For these reason, the optimum loading rate should be a compromise between the highest possible biogas generation and having a justifiable plant economy (Seadi et al, 2008).

The stability of the anaerobic digestion process also depends on concentration of some products produced during the organic break-down process, like Volatile Fatty Acid (VFA). During the acidogenesis process, different fatty acids like acetate, propionate, butyrate, lactate etc. are produced. Excessive accumulation of these acids can drop the pH value inside the reactor when the buffering capacity of the digester is exhausted. The buffering capacity of the digesters and how they will react to certain amount of VFA concentration vary from digester to digester based on its microbial population (Seadi et al, 2008).