In anaerobic digestion process, it is widely stated that hydrolysis is one of the rate limiting steps especially in the presence of complex organic compounds in the feed stocks. Various pre-treatment techniques and their optimization protocols are available in the literature, although they are conducted mainly in academic and bench scale settings. But pre-treatment definitely has a potential to enhance the digestion process and increase energy recovery. In general, feedstocks pre-treatment method for hydrolysis and process improvement can be categorized as following:

These anaerobic digestion feed stock's pre-treatment categories are described briefly with one or two example from the numerous literatures (full references cited at the end of the page) available on them: 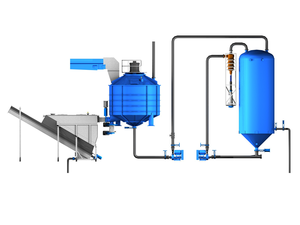 Physico-chemical or chemical pre-treatment consist of steam explosion, application of alkaline solutions such as NaOH, Ca(OH)2 (lime) or ammonia, treatment with ozone, treatment with acid such as dilute sulphuric acid, acetic acid and nitric acid etc (Taherzadeh et al, 2008). The aim of the chemical pre-treatment is to break down the complex organic compounds to simpler structures that are more hydrolysable during the digestion process.


In thermal pre-treatment feedstocks are subjected to a higher temperature in the range of 40-150 0C (Müller, 2000) to accelerate the hydrolysis process by breaking down the long chain bio-molecules. Liu et al (2012) suggested that thermal pre-treatment at 175 0C for 60 min significantly decreases viscosity, improves the dewatering performance, as well as increases soluble chemical oxygen demand, soluble sugar, soluble protein, and especially organic compounds for municipal biomass wastes. In addition, by thermal pre-treatment 59.7%, 58.5% and 25.2% of the organic compounds can be separated in the liquid phase from kitchen waste, vegetable/fruit residue and waste activated sludge respectively. Moreover, waste activated sludge achieves a 34.8% methane potential increase and a doubled methane production rate after thermal pre-treatment.

Specialized microorganism or specific enzymes have also been used to enhance hydrolysis of the feedstocks. Enzymes such as lipases, proteinases, cellulases and hydrolases have been reported to to accelerate hydrolysis in the literature (Dohányos et al., 2004; Mshandete et al., 2005; Schieder et al., 2000). Several fungi, such as brown, white and soft-rot fungi, have been used for pre-treatment of lignocellulosic feedstocks and white-rot fungi are reported to be the most effective microorganisms for lignocelluloses (Sun et al, 2002). The main advantages of biological pre-treatments are lower energy requirement, no chemical requirement and mild environmental conditions; but for most biological pre-treatment processes the treatment rate is very low (Taherzadeh et al, 2008).


Go Back to the Anaerobic Digestion Pre-treatment Home!

Go Back to the Anaerobic Digestion Waste Home!

Go Back to the Eco Ambassador Home!